I am just back from the fabulous Conducttr Conference in London, organized by Robert Pratten.   It was a great event that brought representatives from the creative and academic communities together to discuss transmedia storytelling.  We heard about some amazing projects such as  Jonny Virgo’s City of Conspiracy, Jill Golick’s Ruby Skye PI, and Alison Norrington’s work on the transmedia world, The Chatsfield, which was tied to a series of Harlequin Mills and Boon’s novels.

Sarah Atkinson (University of Brighton) and myself presented on our ongoing transmedia database project that hopes to establish a shared taxonomy as well as research and archival site for projects across the diverse world of transmedia storytelling.   We had a lively conversation with artists, archivists, and academics at the conference that brought some wonderful new ideas and great connections.

Big thanks to Robert Pratten for a super event that brought people together and initiated a productive conversation on cross-platform storytelling.

Here’s Sarah and my presentation on our TMDB project. Big thanks to Robert Foster and Jeff Aldrich, who have been working on the tech and design site of the site with us for some time. Our site is very much a work in progress, but you can follow our adventure here: http://www.tmdbonline.org

I had the honor to speak at the UCLA Cinema and Media Symposium yesterday.  My topic was multimedia scholarship and silent film history, specifically how the Scalar platform can be used to “enact” the scandal surrounding Mabel Normand in received history.   Great questions from the group especially regarding how a praxis focused approach does (or does not) shift the method or analysis in critical media studies.

Below, is my slideshow and an abstract from the talk with links to the Scalar project.

Abstract for the presentation is here:

In this discussion I will look at how writing a multimedia history, a digital scholarly essay (using the platform Scalar), might facilitate an understanding of the “scandal” of the silent film director and star, Mabel Normand.  The idea of “scandal” typically associated with Normand is one of criminal and moral notoriety, but here I am referencing the scandal of Normand’s place in film history, which is largely absent, misunderstood, or underappreciated. Ultimately, I will argue that Normand’s absence is due to a particular professional and personal style of performance by the star that I would call “infelicitous.”  It is a style that foregrounds the contingency of our world, language, and identity.  It is performance mode that multimedia essays, like Scalar, can begin to chart out not by an essential quality of any particular media employed, but by the gaps and slippage from format to format of expression and in pathways that break away from seamless narratives of film history. Such essays can relay or enact the contingency of our language and write new histories of figures such as Normand, either by the design of the essay or by the choices of the readers.

By contingency here I am following Richard Rorty’s  “repudiation of the very idea of anything – mind or matter, self or world- having an intrinsic nature to be expressed or represented” (Irony, Contingency, and Solidarity, 4).   In Irony, Contingency, and Solidarity, Rorty referencing Donald Davidson, asks us to set aside language as a medium of the true, or middle party between self and reality and instead understand language not as representation but as metaphoric redescriptions of life, science, culture (14-16).   Rorty places us in the world of the metaphor and the performative –that is a world less about the relation of communication to external truth  — than to a sense of the context, convention, and intent of the speech act.   Digital media such as Scalar are particularly useful since as Alexander Galloway notes in The Interface Effect they do not produce an object so much as an effect and function not as a representation but as a simulation, moving us away from essences and ontologies to practices and ethics.   In other words, Rorty’s and Normand’s contingency of world, language, and identity is simulated in the multimedia essay not reproduced as a thing.

Writing Contingency: Data Acts: (on the Scandal of Mabel Normand) by Vicki Callahan is licensed under a Creative Commons Attribution-ShareAlike 4.0 International License.

It was exciting to be part of an amazing panel, “Modeling Marriage: Star Couples and the Politics of Sex and Scandal in Hollywood Romance,” as part of this year’s SCMS. My co-panelists were Sumiko Higashi, Cari Beauchamp, Christina Lane, and our Chair was Giuliana Muscio. We had a great crowd with much lively discussion afterwards. My contribution to the panel was “A Fine Romance: The “Infelicitous” Marriage and Performance of Mabel Normand,” and I have included the slideshow from my talk here.

The talk contained numerous clips that you can find in the playlist below:

“A Fine Romance: The “Infelicitous” Marriage and Performance of Mabel Normand,” by Vicki Callahan is licensed under a Creative Commons Attribution-ShareAlike 4.0 International License.

I was fortunate to be invited as a participant in the series SOC(i)AL ART + PEOPLE organized by Anne Bray of Freewaves.  Our challenge was to interrogate: “Can Artists Use Technology to Enable Communities?”

Although we had to move venues at the last minute to LACE due to LA events defined by spectacle, we still had a great turnout and a crowd ready with some quite lively conversation.   The event today was part of a series on socially engaged art; for more info on the rest of the series please see here.   Thanks to everyone who came to the event and contributed to some thoughtful discussion on the impact of art on our changing media/political landscape.

Very excited to be a participant in the upcoming Besides the Screen conference at Goldsmiths College, December 1-2.    More details to follow soon, but fellow panelists include Paul Gerhardt, of Archives for Creativity, Sarah Atkinson, faculty at University of Brighton, currently working with the Sally Potter archive SP-ARK, and my colleague at USC’s Institute for Multimedia Literacy, Virginia Kuhn, Associate Director of the IML.   Our group will be talking about archives and “writing with video.”   If you are in London in early December, hope you can join us — I know I am looking forward to the conversation.

Thought I would test out my new flickr plug in with some images from the Art in the Streets show at MOCA, Spring 2011.  I was fortunate enough to view the show with Nettrice Gaskins, who wrote an thoughtful and informative review for the ART21 blog.  Photos were from the old iPhone so not the best quality.

I am definitely having a very hectic summer so far with lots of travel, and I just returned from the Domitor conference held this year in Brighton. It was a good conference and highlight for me was an evening magic lantern performance.

Now that I am settling in a bit I hope to post an interview with Sumiko Higashi on stars from silent and contemporary era once I get some time to hit the audio editor. In the meantime, there is a very cool site featuring some great research and resources on the silent star Nita Naldi put together by Donna L. Hill, Joan Myers, and Christopher S. Connelly.

Also, just to remind me of my wonderful UK trip, which included a short stay in London and time with friends, I will post a picture from Covent Garden. 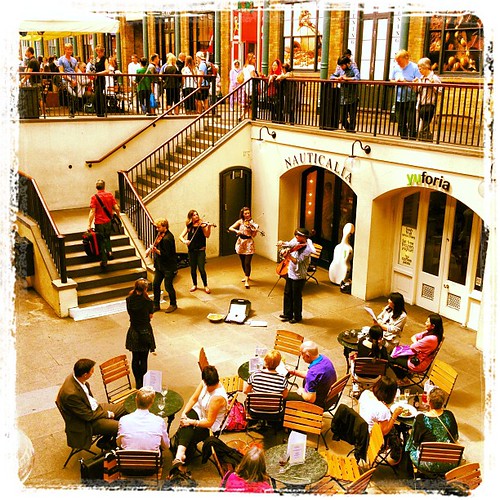